News
You are here: Home / News

From Miracle to Miracle, Blessing Soup Kitchen continues to serve people in need through the faith and giving of others in God’s direction. Founder Sheri Smith (Locke) wasn’t looking to start a soup kitchen. In fact, it wasn’t even a thought until December 29, 2013, when God reached down and gave her His dream. Sheri describes the dream as being so specific she could “smell, taste, and touch” everything in it. First, God showed her specific buildings, the layout of buildings, and crystal clear direction of what God wanted her to do. Then, sharing her dream with her husband Gary, they made the trip to Ottumwa, Iowa, and found the buildings she knew would be used to fulfill God’s vision. Unfortunately, as they were driving up to the building, the realtor placed a “For Sale” sign in the window of the first building, and they then found out that the building next door was also for sale.

They purchased the first building and gave an offer for the second building that they weren’t sure would be received, but it was the exact amount that Sheri knew needed to be offered. Upon purchasing the buildings, they discovered an additional, smaller building they weren’t aware of; it was the same building Sheri had envisioned for Blessings Soup Kitchen. This miracle launched a continuing series of benefits to make the dream of Blessings a reality.

Three weeks later, with only $300 between them, Gary and Sheri began remodeling the Blessings building and figuring out what needed to be done; they were looking at three bids for electrical work, all much higher than expected or what they could afford. Then, an unexpected visitor walked in without knowing what to do or how this work would get done. An electrician stopped by, asking if they needed any electrical help. They asked him to review the bids they were looking at. He stated the work and cost quoted were correct. He then added that God led him to provide the work for the cost of the materials only. This was only the beginning of a barrage of volunteers, constantly coming in to do work on the building, provide what they had and see the project through, without any announcement of a project even being done.

Sheri had the idea of decorating the inside of the building with old doors used as wall paneling. Of course, knowing that the cost of doing that would be extremely high, the idea was nearly dismissed until Sheri and Gary visited an antique store. After hearing the story of Blessings, the store owner had hundreds of old doors and offered as many doors as they needed for $10 a door! So doors became the primary finish material. They used doors for the walls, ceiling, tables, and countertops; there were doors everywhere.

The furnace, air conditioner, and flooring all came from unsolicited donations. The flooring was given to them by a donor who didn’t even think they would want it or would be enough to cover the space. However, when it was exactly the color scheme Sheri had envisioned, and when installed, it was a perfect fit; no extra was left over, and no more was needed.

On another occasion, an individual donated a box of screws. This may not seem significant; however, it was when Sheri and Gary went into town to work on the Blessings building, not knowing what they would do when they got there. Because, as Sheri stated to Gary, they “didn’t even have enough money to buy a box of screws.” As they were painting the doors, a man walked up holding a box, stating, “something was telling me that you could use this box of screws.” God’s sense of humor is as amazing as each miracle he provides.

As the building was nearly ready to be able to start serving, Sheri and Gary hired a cook to oversee all preparation of the food. Through organizing and preparing for their opening, it became clear that this person was not the right fit for what they were trying to do. Not wanting to let the cook go and not knowing what to do, they prayed for God to intervene and show them what He wanted. The next day their cook informed them that she had a personal situation come up and she would have to move to Florida. God had provided another miracle to keep things moving in His vision.

Preparing Blessings for its opening, they wanted to provide 5 “soft opening” meals for family and friends. But unfortunately, they only had $77 in the bank to do that. So, not knowing how they could provide five meals with that money, Sheri moved forward in faith, and it was enough to get started.

Blessings began by serving an average of 20 people a day, always unsure how they would provide for the next day, but somehow there was always provision for what they needed. As the number of people served grows, so does the need for better equipment. So far, a cooler and freezer were donated by Cargill Eddyville; a commercial mixer was provided by John Deere the same day the small mixer they were making do with was broken beyond repair. Another much-needed mixer was donated by an individual who felt she needed to visit Blessings and observed the need firsthand. Upon presenting the mixer, this same individual also contributed a lot of silverware. All items were given when needed and without asking for them.

The Blessings of each miracle continue daily. After Blessings was established, Sheri and Gary felt God led them to open a coffee shop. They felt this had to be from God, as neither one of them was a coffee drinker at the time. So about nine months ago, they opened up Top Hat Coffee & Entertainment. Always keeping the mission of Blessings at the forefront and being the example God wants them to be, they have seen Top Hat grow beyond their imagination, but not beyond what they know God can do. And God has brought Top Hat in to help supplement the increasing need for Blessings by giving its proceeds back to Blessings. In the Ottumwa Courier’s “Best of Southern Iowa 2018” readers awards, Top Hat was voted #1 Coffee Shop and #3 Sandwich Shop in Southeast Iowa. This is yet another example of the excellence that comes from following God’s direction and allowing him to give the provision for it.

Even with the additional help that Top Hat provides, it is not nearly enough to sustain what is needed for Blessings. The number of people Blessings serves daily has grown from the original 20 to an average of 200, and much more in the winter. Throughout the summer, they see more kids coming in, and as the need grows, the ability to provide continues to come from the volunteers that give to Blessing’s mission. The financial needs also continue to grow. It takes an average of about $200 a day, $40 for bread alone, to provide what is needed to serve the people they serve; again, the need is much more significant during the winter months.

Blessings have about 50-70 volunteers each week; all dressed in the Blessings t-shirts that are also donated. Some give their time to help serve; others help Sheri in the food preparation. Several groups come in and volunteer regularly. Once a quarter, a Mennonite group does all the food preparation and serving for a day. The 1st United Methodist Church provides all the food, preparation, and service one day a month. These days are the only days that Sheri and Gary get to take some time to catch up on bookwork and get a little bit of a hiatus from their tireless work. More of this kind of help from churches and other groups are greatly needed.

Financially Blessings continues to rely on free will donations, some given daily and others by organizations willing to help monetarily. Yet, there isn’t any logical certainty of how provisions will arrive. Sheri says, “I never know where the provision will come from, but it’s always fun to see how it happens.” Volunteers with the heart to give what they can provide are always welcome and quickly put to work. As Sheri states, “Blessings is made of the best of Ottumwa.” “It is amazing to see others give, all out of the goodness of their hearts.”

The ongoing growth of Blessings has given Sheri and Gary a provable story to tell, showing the greatness and goodness of God. Blessings continue to see its needs met daily in ways that are “never the way you would logically think they would happen,” says Sheri. Instead, each need is provided, one miracle at a time, in ways that are undisputed acts of Jesus working through people willing to spread His kindness to those in great need. “I was not able, I was just willing and He (Jesus) has always come through” Sheri Smith.

[EasyGallery key=’20’]  In Southeast Iowa there are a lot of small towns and communities, each one with their own character and unique attributes.  Kirkville, however, is one that is seeing a miracle radiating from the center of the town.  Kirkville Community Church continues to grow and see lives change every day.

Kirkville, Iowa is a small town of approximately 170 people, established in 1844 and is driven past by thousands every day without anyone really taking notice.  In the center of town is Kirkville Community Church.  This church was built in 1844 END_OF_DOCUMENT_TOKEN_TO_BE_REPLACED

Through receiving his National Council of Architectural Registration Board (NCARB) certification Ben Foote is able to obtain licensure in any state in the U.S., enabling

Through receiving his National Council of Architectural Registration Board (NCARB) certification Ben Foote is able to obtain licensure in any state in the U.S., enabling Faithe-Built to expand their outreach beyond the State of Iowa. 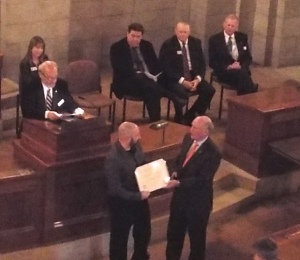 In a ceremony at the Nebraska State Capital Building, in Lincoln, Nebraska, Ben Foote was recognized and received his certification to practice Architecture in Nebraska from the Nebraska Board of Engineers and Architects.

Ben’s statement for the ceremony talked about his inspiration in becoming an architect being driven by making an impact on thousands of people through the buildings he designs. Through the mission of Faithe-Built the reality of his dream is his life’s purpose.